They said, “Be authentic”.

They said, “Speak your truth”.

They said, “Fight for diversity and inclusion”.

Then they said, “Don’t discuss it in the office”.

Then they said, “It may cause division”.

Then they said, “Stop holding on to the past”.

Recent events have shown me that many leaders are double-minded. Why are leaders afraid to speak about real diversity and inclusion when it comes to racial diversity?

I have fought for gender leadership and financial inclusion, and many people have cheered me on. With my organization, Rise and Lead Women, we have tried to build allies to help each other move up the ladder.

However, a speaker at a recent conference breakout session on Diversity and Inclusion in Dutch companies grew cold when I asked her about the state of racial diversity in companies. It was as if it was an abomination to even mention the topic. Then she found the strength to promise to refer me to the only person who works on that sort of issue. Guess what? That person was a black man.

After a black man was murdered on the street by a police officer in the United States, many condemned the act and called out for racial justice. Some bold global corporate leaders stepped up for the very first time to start the conversation about race. Yet many more corporate organizations have been silent.

Why is that? I will share with you what I know.

In 2011, I travelled to the U.S. for a leadership development course. I was the only black person and only woman in the room. I also was the person there who was a business owner with many employees. At first, people didn’t warm up to me. After we made our introductions though, I made many friends. Too many. I was naïve; I didn’t understand at the time why everyone suddenly wanted me on their team.

As part of the course, we were told not to discuss certain things in the workplace – politics, religion, race and football. As a Nigerian, I didn’t know much about the history of racism because colonization, slavery and racism were not taught in our school system.

Several years later, after I relocated to the Netherlands, I began studying the subject of leadership at the Master’s degree level. In one of my management classes, I was reminded once again not to discuss politics, race, religion and football. I remember telling my professor that, in Nigeria, we openly discuss these topics in our workplaces. She told me that these subjects are not allowed to be addressed in the U.S. I agreed, and I have been following those rules ever since. I believe many people have been following these rules, which may be why many corporate organizations don’t speak up against racism in their workplaces.

Today, I will break this rule.

I have been surprised at how the death of George Floyd has affected me. I have cried so much. Part of my pain is because I have a son who loves basketball and had dreams of playing for the NBA. He didn’t understand why his father and I would not allow him to go to school in the U.S. After the gruesome killing of George Floyd, he understands now.

How can we not discuss the weapons of power and racial injustice that have been used against us? How will this problem be solved if we continue to deny it exists and suppress our pain?

We need to re-write the rules. Racism is an ongoing struggle. It’s not a struggle that lasts for just a few weeks, a few months or a few years. We must continue to fight for racial justice. For that to happen, we must be allowed to speak about it openly and without judgement.

First, I want to acknowledge companies like Coca Cola, UPS and Salesforce that have dared to start this conversation. You are change-makers, and your names will be added to history.

Now is the time to have a conversation about race in every workplace and every institution. Not talking about racism is taking the side of evil, and history will also remember you and your organization.

I am angry and frustrated. My frustration stems from the fact that I’ve achieved so much in life, yet I often need to prove myself to people who have not attained a quarter of my accomplishments — just because I have a different skin colour.

Many women I have helped through mentoring have asked me how I became bold enough to reach out to established leaders. I believe some of them don’t think I’m qualified enough to attract these leaders. They are not interested in my qualifications. They simply see my skin colour. They don’t know that for each one leader or establishment who said yes to me, I’ve had 20 who said no and wouldn’t even look at me. That is why I shamelessly promote every leader and organization who says yes to me.

Do you want to open up a meaningful conversation about race? Here is what I’d do if I were you:

I know that many white people want to help end racism, but they do not know how to begin. It is not enough to donate to a social media campaign or another fundraiser. We seek equality and justice for ALL – not showcasing a few successful black people.

All we ask is that white people treat black people as human beings. We do not want or need a white saviour.

Here are some concrete steps you can take if you accept:

Finally, please don’t say you don’t feel qualified as a white person to speak out against racism. I’m not asking you to step out of character. I’m asking you to speak up against the unnecessary killings of black men, the unjust treatment of black people in your company or community. If someone took the life of your husband, brother, son or nephew, would you need any form of qualification to be enraged? I don’t think so.

Each of us is qualified to speak up against hate, murder and evil.

Leadership is not a title. It’s about using your voice and position to drive social change. Every Friday, I will use my platform to showcase the voices of leaders who are speaking up against injustice. I hope to hear from you. 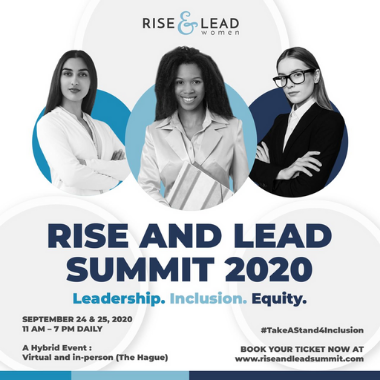 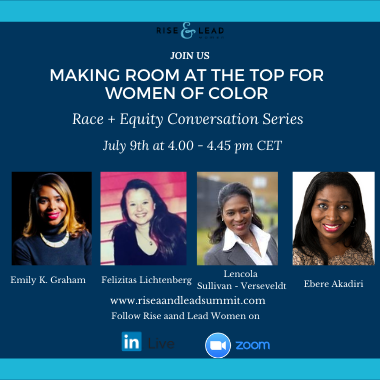 MAKING ROOM AT THE TOP FOR WOMEN OF COLOR 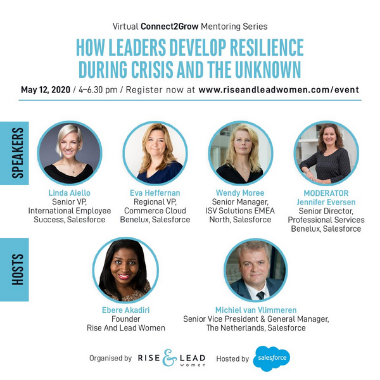 HOW LEADERS DEVELOP RESILIENCE DURING CRISIS AND THE UNKNOWN